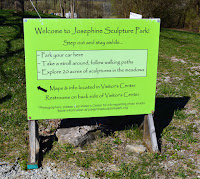 Sometimes there are points of interest practically right under our nose. Such was the case for me when I ventured about four miles from my home in Frankfort, Ky.,  to visit the Josephine Sculpture Park.

I live  in  a town rich in history, being the capital of Kentucky. But for some inexplicable reason, I never visited the sculpture park, even though I've lived here for nearly 16 years (it didn't become a public park until 2009).

So on one warm pre-spring morning, I decided to drive to park and see what it had to offer. It was bigger and better than I expected. 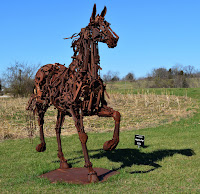 According to the park's website, JSP is named after Josephine VanHouten, who owned a farm from which the park is located, off Lawrenceburg Road. Her granddaughter, Melanie, is the artistic director.

As I walked on the quiet paths from one section to the other, I looked at the 40 or so sculptures and murals that adorn the public park. As for the art, some I liked, some not so much, but it was still a feast for the eyes to discover a park devoted to artistic expression.


The park also has a primitive amphitheater for performing arts, visitors center, and during the year hosts workshops, field trips concerts, exhibits and more. It is also pet-friendly and smoke-free.

I'll be making return trips, with my dogs, to stroll about the park now that spring has finally arrived and the weather will be warmer.

I plan to discover more sites close to home in the coming months.

Posted by Michael Embry at 1:53 PM No comments:

I hope you don't mind me tooting my own horn but I was notified this week that my novel, "Old Ways and New Days," is a finalist in the 2017 EPIC eBooks Awards category of contemporary fiction. 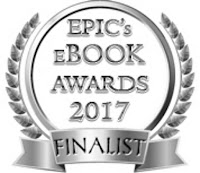 What is EPIC? It's the Electronic Publishing Internet Coaliton—the "voice of ePublishing since 1998." The organization has been around since the beginning of digital books.

A fellow author at Wings ePress, Suzanne Hurley, is a finalist in the young reader category for "The Teddy Bear Eye Club." Read more about the organization here.

EPIC also has competition for best book covers—Ariana Awards—in 10 categories. Check them out as well to see some impressive artwork.

This is a wonderful organization for small presses, indie authors, illustrators and others in the industry, providing a great voice in the world of publishing. I encourage authors and publishing houses to become an EPIC member.

The organization will hold its annual convention—EPICon— June 16-17 in San Antonio, Texas.

I'm also excited about the recognition because the sequel to "Old Ways and New Days" will be published this year. And I'll soon be working on the third book in the series in the next few weeks. My novels are also available in print.

I'll keep you posted when the winners are announced. For me, it's already a win-win regardless of the outcome.