You've labored over your manuscript for countless hours, fine tuning, polishing, revising, and everything else to make it the best possible novel.

Yes, it's a creative effort, and you should feel proud of your accomplishment. A lot of folks talk about writing a novel, but once they embark on that solitary journey, they find out it's a more arduous than imagined.

You wait to see your manuscript evolve into a print or e-book, probably both with the new technology. You're happy and proud with your creation. You can't wait to share those thousands of words with the world.

But then reality begins to set in.  While you may receive some adulation and some sincere praise from some family members, some friends, some acquaintances, and some people you don't know, that doesn't equate into thousands of copies of your book flying off the bookshelves into the hands of readers or across cyberspace into e-tablets.

At least for the vast majority of authors.

I'm not going to get into all the figures, but if you find the time, read "The 10 Awful Truths About Publishing" to get an idea about the odds of becoming a successful (by that, I mean bestselling) author.

Now don't get me wrong, there are some successful authors out there. I have several author friends who are doing quite well. But I know many more who aren't doing that well.

Now there are some things you need to understand. While you have a love of books, many others don't, for various and sundry reasons. The Pew Research Center reported in October that fewer American adults are reading a book, dropping to 72 percent from 79 percent.

And a report by the National Endowment for the Arts last year revealed that only 55 percent of adults read a book for pleasure.

Books are part of a vast information and entertainment commerce. Rather than purchase books, many people would rather spend their hard-earned money on sporting events, music concerts, theatrical shows, music downloads, movies -- you get the idea. Books are simply part of the mix.

I'm not trying to dissuade writers from writing. I'm certainly not making a living from my writing. I belong to that proud group of starving artists.

So why do I write?

It's creative expression for me. I love telling stories (and reading them as well). I think it's fulfilling on many levels: thinking, composing, working with others (editors, graphic artists, etc.), and simply keeping my brain active. That's where I find my joy in writing -- and why I'll continue to be a writer.

And maybe one day the timing will be right and I'll become a bestselling author.

Posted by Michael Embry at 2:49 PM No comments:

But What Happened to....

While I was out and about today, a nice woman who read my novel, "Old Ways and New Days," told me that she really liked the story. 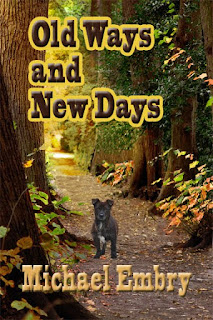 ...what happened to Brody, the son of the protagonists, John and Sally Ross? The young man has some issues, as do others in the novel. They're virtual humans, and we know humans aren't perfect.

I've mentioned in the past that "Old Ways and New Days" is the first book in a series. The second book will feature Brody as a prominent character. And there will be a few others who will take center stage.

In the novel, I laid down the groundwork for other stories in the "saga" of John and Sally Ross. I introduced quite a few characters, some supporting and some very minor, who will return.

The main reason I decided to make this a series is because I really got into the characters. Or perhaps, the characters got into me (novelists will understand what I mean). I found them interesting on many levels.

And I like reading a series with compelling and quirky characters. My friend, Bill Noel, has a popular Folly Beach Mystery Series that I look forward to reading each book (his latest, "Boneyard Beach" is being released in December).

Another reason is that when writing "Old Ways and New Days," it was turning into the never-ending story that was going in distinct, different directions, especially the exploits of Brody. So during the rewrites, I removed Brody's story and saved it for the sequel.

I certainly didn't want "Old Ways and New Days" to turn into a "War and Peace" or "Ulysses," in terms of word count (critical acclaim, I wish). Leo Tolstoy, James Joyce, and authors such as Stephen King,  Victor Hugo, and David Foster Wallace can write mega-length novels and be read. Michael Embry, not! I'm a realist.

I've been asked after each of my novels if there would be a sequel. I wrote all of them with the idea that I could go back and continue the stories. And maybe I will.

But for right now, I'll be focusing on completing Brody's story.

Until the next time...
Posted by Michael Embry at 11:34 AM No comments:

I sold some books, made some new friends, saw some old friends, learned a few things, and made a several connections during the course of the day.

My table mates were William Heath, a retired professor of American Literature from Frederick, Md., and Ron Gambrell, a public school teacher and contractor from Louisville.

Heath, a novelist and historian, had a very good day as he sold out of his "William Wells and the Struggle for the Old Northwest." Gambrell also sold quite a few copies of his young adult novel, "Grayson Springs." My latest novel, "Old Ways and New Days," was my best seller.

There were more than 200 authors and illustrators participating in this year's fair. And more than 2,600 people showed up to buy books ($116,000 worth) and attend panel discussions and symposiums.

The top non-fiction seller was "Postcards from Historic Frankfort" by Russ Hatter and Gene Burch. Sharyn McCrumb headed the fiction list with "Nora Bonesteel's Christmas Past." The overall sales leader was photographer James Archambeault with his 2016 Kentucky Calendar.

Besides chatting with Heath and Gambrell during the day, it was nice talking to Cheryl Della Pietra ("Gonzo Girl") and Jason Mott ("The Wonder of All Things"), during a drive to and from Blue Grass Airport in Lexington. Among the friends I hadn't seen in a while were Lowell H. Press ("The Kingdom of the Sun and Moon"), Ed Ford ("The Plot") and Sharon Reynolds ("Walking Air").

I attended a lively Kentucky Book Fair Kick-Off event at the Paul Sawyier Public Library on Thursday evening featuring Robyn Peterman and Tonya Kappes. Besides talking about their bestselling novels, they stressed to aspiring authors they would be where they're at now without the help of folks along the way and that they try to pay it forward.

I also had some folks come to my table and ask if I would be available to talk to their book clubs. Of course! And that goes to others out there. With today's technology, practically anything is possible. So keep that in mind if you want to work out something with authors in your reading groups.

Bill Goodman, one of this year's KBF authors and a newsman at Kentucky Educational Television, conducted Skype interviews with Della Pietra and John Temple in the days leading up to the book fair.  That's also something authors should consider in promoting their books.

Now to take a few days off and get some needed rest.

One of my favorite events of the year will be on Saturday -- the Kentucky Book Fair.

This year marks the 34th edition of the book fair, founded by former Frankfort State Journal editor Carl West back in the days before the Internet and e-books. He's still the inspirational force and guiding light behind the event that will be held Nov. 14, from 9 a.m.-4:30 p.m., at the Frankfort Convention Center.

I've been fortunate to participate as an author, patron and volunteer through the years. And I've participated at the three venues -- Kentucky Department for Libraries and Archives (1981-1993), Exum Center at Kentucky State University (1994-2001), and the Frankfort Convention Center (2002-present).

I believe my first KBF as an author was in 1984 with "Basketball in the Bluegrass State: The Championship Teams." I'll be at this year's fair with my 11th book and seventh novel, "Old Ways and New Days."

I've attended as a customer because I like the wide variety of books that can be purchased as well as activities held during the day such as panel discussions and readings. And it's nice to chat with the authors and get signed books (and vice versa from the other side of the table in my author role).

As I've mentioned numerous times, it's also a great time, with Christmas just around the corner, to buy gifts for friends and family.

For the past six years I've been a volunteer, serving as marketing chair on the executive board. It's a lot of work but satisfying to be part of a dedicated team focused on putting all the pieces together in making it the state's foremost literary event for readers of all ages.

Proceeds from the event are used to benefit public and school libraries across the state. To date, more than $375,000 has been awarded.

This year's book fair will have nearly 225 authors and illustrators to discuss and sign their books as well as participate in other activities. By the way, the fifth annual Kids and Teens Day will be on Friday, from 9 a.m.-2 p.m., at the convention center.

More importantly, organizers hope that several thousand patrons (it generally averages 3,000 to 4,000) will be there to show their support in this annual celebration of reading, writing and everything literary.

Posted by Michael Embry at 3:24 PM No comments:


It's been a busy past few days for me as I've been involved with various and sundry book-related activities. As I've mentioned in previous posts, writing a book is just one part of the process. There is also the rewriting and editing phase, and then, promotion.

My Goodreads promotion for "Old Ways and New Days" is over. There were 443 entries for the five books, with winners from South Dakota, Pennsylvania, Florida, Mississippi and Alabama. I hope they enjoy the novel and take time to leave a review in Amazon or some other review site. Or, better yet, tell their friends about it. Nothing helps promote a book better than word of mouth.

And I might add that authors appreciate reviews and or ratings and word-of-mouth recommendations. Those online ratings are visible so please do me and other writers a favor with a rating, and if you have the time, a short review.


I've also produced a trailer for the novel. It's pretty basic stuff as I only wanted to include the essentials. I've been guilty in the past of having trailers that ran a bit long. Lots of viewers don't want to spend that much time on something like that so this one clocks in at about one minute, 30 seconds.

Next on my agenda is the Kentucky Book Fair on Nov. 14 at the Frankfort Convention Center. About 225 authors and illustrators will be taking part, signing and talking about their books with patrons, taking part in symposiums and panel discussions. You can download the catalog at the website.

This marks the 34th year of the state's premier literary event, and proceeds benefit public and school libraries. If you're in Frankfort, drop by my table for a visit. A lot of effort has been put forth by some dedicated small army of  volunteers.

I also hosted a "Meet Kentucky Book Fair Authors" program on the local FPB-TV cable station. I've included them here as well for your viewing pleasure.

Well, I need to go address some postcards and mail a few more books.