Book Promotion for Darkness Beyond the Light

The second book in my John Ross Boomer Lit series, Darkness Beyond the Light, will be on sale for 99 cents for one week beginning April 21.

This past week, Old Ways and New Days, the first book in the series geared toward baby boomers, was offered at that price. And if you have Kindle Unlimited, you can read them for free.

The books are on sale as part of a promotion from Wings ePress before the publication of New Horizons on May 1.

New Horizons, the third book, can be downloaded on preorder before the release date. It will be available in print on May 1 as well.

Darkness Beyond the Light deals with John and Sally Ross confronting their son's drug problem. They also have Sally's opinionated octogenarian mother to contend with on the homefront during the usually joyous Christmas holiday season.

In New Horizons, John and Sally attempt to get away from all the chaos at home by taking a long overdue vacation to historic Budapest. But they encounter other issues along the way that make it a memorable trip they'd almost soon forget.


I hope that if you chose to read the books that you find them unforgettable—in a good way. And don't forget to leave a review and/or rating (for me and other authors after you finish reading books).

Posted by Michael Embry at 5:00 AM No comments:

Greece is the Word

I'll soon be flying off to the birthplace of democracy, a perplexing word in these disjointed times around the world. 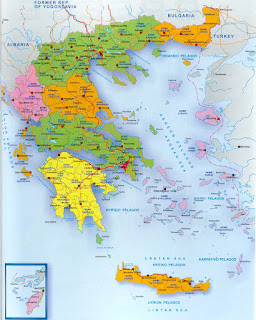 Greece always seemed like a magical place to me while growing up in Kentucky, with its pristine beaches splashed by the deep blue crystal waters of the Mediterranean, Aegean and Ionian seas, rugged and hilly landscape, and whitewashed homes.

I enjoyed reading Greek mythology as a child, and later, The Odyssey in high school. And there were movies such as Jason and the Argonauts, Zorba the Greek, Never On Sunday, Shirley Valentine, and recently, Mamma Mia! The Movie and Mamma Mia! Here We Go Again.  My favorite James Bond flick, For Your Eyes Only, had scenes from Greece.

And now I'll get to see and experience first-hand this ancient and enchanting nation with my wife and other adventurous and curious travelers.

In addition to Athens, we'll visit places such as Delphi, Corfu, Kalambaka, and Nauplia.

Among the sites we'll see along the rocky way are the Acropolis (home of the Parthenon, Temple of Athena, Nike, and Erechthelon), the Temple of Apollo, the Old Royal Palace, Achillion Palace, Church of St. Spyridon, Temple of Zeus, and various monasteries, museums, and landmarks.

For the past several months I've been devouring a lot of materials about this historic country—from the Internet, travel guides, DVDs, and travel programs on television. I've tried learning a few Greek words but I'm not sure how effective I'll be in communicating with my Southern twang.

Check back in a few weeks and I'll have a few posts about the trip along with photographs from various locales.

Posted by Michael Embry at 5:39 PM No comments:

Between now and April 30, readers of my John Ross Boomer Lit series can pre-order the electronic version of New Horizons.

New Horizons is the third novel in the coming-of-old-age series from Wings ePress involving retired newspaper sports editor John Ross.  It's available on Amazon by clicking here. A print edition will be available on May 1.

I'm excited because this is the first time one of my novels has been offered on pre-order. It makes marketing and promotion a bit easier, especially for someone who struggles with that aspect of being an author in the 21st century.

The new novel primarily focuses on John and Sally's long overdue vacation to Budapest, Hungary. They encounter all kinds of folks that turn the 10-day trip into an adventure they never expected as they experience more than sightseeing.

And even though they're five thousand miles from Kentucky, events pop up that keep their minds on happenings back home involving their son, daughter, and Sally's mother. Along the way, they also make a few discoveries about themselves and their relationship in the beautiful city by the Danube River.

In addition to New Horizons being available on pre-order, the first two books will be on sale in electronic versions for 99 cents leading up to the release date. And to my knowledge, this is the first time these novels have been discounted for a limited time.

Old Ways and New Days, the first in the series, can be downloaded until April 21, and Darkness Beyond the Light, the second, from April 21-28. For those who prefer print, they can be purchased but without a discount. That's out of my control.

I plan to have a few more announcements in the coming weeks so stay tuned by following my blog (see the "follow" button in the right column).

Posted by Michael Embry at 7:21 AM No comments:

The third book in my John Ross Boomer Lit series, New Horizons, will be released May 1 by Wings ePress.

One of the promotions is to provide readers an opportunity to purchase the first two books, Old Ways and New Days and Darkness Beyond the Light, at discounted ebook prices.

Beginning Sunday, April 14, Old Ways and New Days can be downloaded for one week at the amazingly low price of 99 cents. Hard to believe, isn't it?

But wait! The following Sunday, April 21, Darkness Beyond the Light, will be available for the astonishingly low price of 99 cents for one week. Have you lifted yourself off the floor yet?

Silliness aside, my novels have never been priced this low. As part of the promotion, it's a great way to introduce discriminating readers to the series—especially baby boomers. And maybe their children and grandchildren who are curious as to what makes the old folks tick.

For those who aren't familiar with the series, it's about the trials and tribulations and the joys and jubilations of John Ross after his retirement as a sports editor of a Kentucky newspaper.

It's a coming-of-old-age series that deals with family, friendships, health, and redefining one's purpose while moving into that final phase of life.

As mentioned, New Horizons is the third book in the series. It's about a wild and wacky trip to Budapest, Hungary. I'm currently working on the fourth installment and know what the fifth book is going to address.

New Horizons, like my other novels, will be available in electronic and print. More about that later.

P.S. If you read the books, please leave a rating and/or review. It would be much appreciated.

Posted by Michael Embry at 3:30 PM No comments: