I enjoy songs that take me back to my teen years. One of my favorites is "Small Town Saturday Night," recorded by Hal Ketchum. 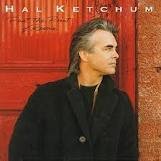 The song,  written by Pat Alger and Hank DeVito, reached No. 2 on the Billboard Country Chart in 1991.

I lived in Campbellsville, Ky., a small town back in the 1950s and '60s,  and could identify with the scenes depicted in the song, such as seeing an Elvis movie several times or putting a dollar's worth of gas in a car and driving around most of the evening doing nothing. (Gas was about 29 cents a gallon back then.)

Sometimes we'd get a six-pack of beer (if we could find someone to buy it for us), and sometimes we'd run into someone who had drank one beer too many:


"Got a six-pack of beer and a bottle of wine.
Gotta be bad just to have a good time."

One of the funniest lines is about folks leaving town and never coming back:


"Bobby told Lucy,  'The world ain't round,
'Drops off sharp at the edge of town.
'Lucy, you know the world must be flat.
'cause when people leave town, they never come back."

That reminds me of many small communities where kids go off to college or leave to find better paying jobs in cities, and never return to settle in their hometowns. That's probably still the case for many small towns.

The video released with the song was cute as well as it had clips from a western -- probably "The Terror of Tiny Town" --  that featured "small" people. I've included the video as well as a live performance by Ketchum.

Posted by Michael Embry at 5:32 PM No comments:

In my last post I noted that I thought it was important for authors to use a mix of media in marketing and promotion.
Another avenue is by guest blogging. Several of my author friends share their blogs with other authors. It’s a great way to broaden reach and expose authors and books to a wider audience. Check out blogs by Taryn Raye, Devon Matthews, Teresa Reasor, and Amy Durham.

Some authors are part of a blog site, such as Cowboy Kisses, contributing posts on a regular basis to a particular genre. It’s another great way of attracting readers.

This week I’m featured on a weekly blog by Tugboat Design. Each week an author is featured in a Q&A format. Tugboat Design worked with me on my latest book, "Laments," and the blog showcases its clients -- a win-win situation.


What effective ways do you recommend for marketing and promotion? I plan to have author interviews in the coming weeks. Let me know if you'd like to be featured.


Until the next time…
Posted by Michael Embry at 1:38 PM 2 comments: 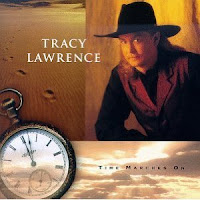 Country music star Tracy Lawrence sang about the changes -- from sweet to bittersweet -- a family goes through in "Time Marches On."

The song, penned by Nashville Songwriter's Hall of Famer Bobby Braddock, was No. 1 on the Billboard Country Chart for three weeks in 1996.

It begins with a young couple at home with two small children in the 1950s:


"Sister cries out from her baby bed
Brother runs in, feathers on his head
Mama's in her room learnin' how to sew
Daddy's drinkin' beer, listenin' to the radio"

In the second verse, the song moves on to the '60s with  sister is beginning to use makeup, brother is into drugs, mom is in depression, and dad's got a girlfriend.

And the final verse ends with the sister calling herself a "sexy grandma," brother is on meds for high cholesterol, mom is senile, and dad is six feet under.

I like the straightforward lyrics, but it's the references to put a time frame on the events that makes the song so effective to me.

After the first stanza we learn that the father is listening to Hank Williams' "Kaw-Liga" and "Dear John" on the radio and after the second verse we know that "Bob Dylan sings 'Like A Rolling Stone.'"

Braddock's thought-provoking song reflects many aspects of the American family during those decades, and Lawrence's delivery is powerful.

Another thing the song notes is:

Posted by Michael Embry at 11:17 AM No comments:

While promotion and marketing a book on the Internet is essential, I believe a mix with traditional media is important for success in sales.

You might not hit a home run but you could get extra bases when you connect in the right places.

I’ve used social media to get the word out about my books. I’ve sent emails (no spamming), blogged, and become involved in an assortment of networks such as Linkedin, Goodreads, Shelfari and Manic Readers. You can find my works in places like Amazon.com, B&N.com, Smashwords.com, CreateSpace.com, and Wings-Press.com.

I recently participated in a giveaway for my latest book, “Laments,“ at Goodreads. It attracted 412 entries for the three copies. You might go there and sign up for drawings conducted by other authors. Be sure and “friend” me while you’re there.

With all of my novels I have mailed postcards to notify libraries, bookstores, friends, and family. One reason is that folks don’t always see what you’ve posted on the Internet. There may have been times when an email went to a junk-mail filter (ouch, that hurts!) and was inadvertently deleted (of course!). Believe it or not, some folks don’t use a computer. And, if they do, there's a chance they may not go to the same websites where you shout to the world about your book. Timing is important.

For "Shooting Star", which was published in 2011, I advertised in the Kentucky Book Fair catalog because it went to great audiences -- readers and libraries.

I also purchase book marks that I hand out at signings, book fairs, and other functions. They include my website and other places where they can purchase the book. When people purchase books directly from me, I always include a book mark.

I believe it’s best to cover as many bases as possible, especially if you want to be a consistent hitter as an author.

Until the next time…
Posted by Michael Embry at 7:43 PM 1 comment:

Story Songs: Don't It Make You Want to Go Home?


Joe South's was one of the more socially conscious singer-songwriters of the 1960s. He wrote classics such as "Games People Play," "Walk a Mile in My Shoes," and one of my favorites, "Don't It Make You Want to Go Home?" 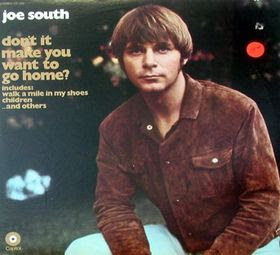 South, whose real name was Joe Souter, was born and raised in Georgia. In addition to be a singer, he also was a session guitarist and wrote hit songs for folks such as Billy Joe Royal ("Down in the Boondocks"), Deep Purple ("Hush"), The Raiders ("Birds of  a Feather") and his biggest hit of all, for Lynn Anderson, "Rose Garden" in 1971.

"Don't It Make You Want to Go Home?" was an environmental song before environmental tunes became popular. He writes about returning to his hometown:

"Oh, the whippoorwill roosts on the telephone poles
And the Georgia sun goes down
Well, it's been a long time
But I'm glad to say that I'm
Going back to my hometown"

But things have changed dramatically since he was last there; it's not the same place:

"But there's a six-lane highway down by the creek
Where I went skinny dippin' as a child
And the drive-in show where the meadow used to grow
And the strawberries used to grow wild
There's a drag strip down by the riverside where my grandma's cow used to graze
Now the grass don't grow and the river don't flow like it did in my childhood days."


I know when I've traveled to places I lived years ago that things have changed. Yes, there's been some progress. But not all progress is good, especially when it takes a toll on the environment. Any thoughts?

South won a Grammy Award in 1969 for "Games People Play."

"Don't It Make You Want to Go Home" lyrics

Westerns were popular in movies and television in the 1950s and '60s. Probably no song captured the spirit of the wild west than Marty Robbins's "El Paso."

The song was released in late '59, and reached No. 1 on the country and pop charts in '60. It's a bittersweet love story about a cowboy who falls for a Mexican dancer:

The narrator admits that he is probably asking for trouble, noting that Feleena's dark eyes were:


"Evil and wicked while casting a spell."

But he was smitten:

"My love was deep for this Mexican maiden
I was in love, but in vain I could tell."

In a moment of jealous rage, he ends up killing another cowboy for flirting with the woman he loved. He had to flee El Paso to the New Mexico badlands, but love forced him to make a fatal return to see Feleena.

He is greeted by a posse on his return, but continues his fateful ride to Rosa's cantina:

He finally reaches Feleena, who kisses him on the cheek as he lies mortally wounded in her arms:


"Cradled by two loving arms that I'll die for
One little kiss and Feleena, goodbye."

When I was in the sixth grade at Campbellsville (Ky.) Elementary School, I participated in a skit during a talent show. I believe my classmate was Kenneth Graham.

I still love to hear this song -- Robbins's great voice, the background harmony, and guitar work. Some versions include a horn, and along with the guitar, giving it a Tex-Mex feel.

The song earned Robbins a Grammy for Best Country & Western recording in 1961.  He died in 1982, at the age of 57, following heart surgery.

Besides being an singer-songwriter, Robbins was active on the NASCAR circuit in the 1960s and '70s.

I've included a video of the Grateful Dead performing the song.


My short-story collection, "Laments," has been out for nearly three weeks. For those interested in a free copy -- did I say free? -- then visit Goodreads and enter the drawing.

Giveaway ends September 12, 2012. See the giveaway details at Goodreads.
Enter to win
While there, also sign up for other books being offered by authors and publishers. You can't beat free, can you?
Goodreads is one of my favorite sites. You can make friends with other readers, authors, and follow authors so you'll know when they blog, have a book published, and places such as discussion groups.
Another great site is Shelfari, which offers similar activities as Goodreads. I'll probably be offering free books there in the coming weeks.
You can also visit my website, www.michaelembry.com, to register for the book.


Until the next time
Posted by Michael Embry at 6:46 PM 2 comments: