Time for a Change

For most of my writing life, I've been an early bird, getting out of bed before the dawn's sunrise and working on a manuscript for several hours before heading off to a bill-paying job.

But I'm retired now and my daily routine has changed as well. It took me a while to recognize it, but blame that on my age for not adapting soon enough. I suppose one reason I didn't was because I adhered to my old schedule while writing "Old Ways and New Days." 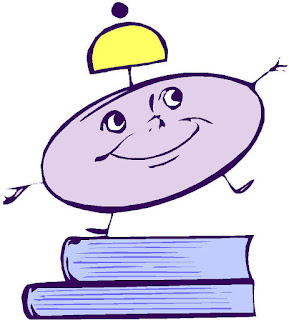 Now I'm working on the sequel (no working title as yet), which has had numerous starts and stops the past few months. But I think I'm on course to finish the first draft because I'm writing in the evening.

My mornings were becoming too busy with trips to the YMCA three days at week, usually leaving home at 5:30 a.m. When I return home I walk the dogs, do household chores, take care of various honey-dos from my wife, and all other things that pop up during the day.

I've found that the evenings work better for me. I generally start at 7 p.m., after dinner and taking the dogs for another walk, and write for about two hours. And then I get ready for bed.

One thing I do is end each session with some nugget to sleep on, which gets me right on the track the next evening. I simply pick up where I left off -- and I'm eager to do it. I've been doing this since Sept. 1, and I haven't missed an evening. Even those days when I can't get to the computer by 7, I find the time at 9, 10 or whatever to write for an hour or so.

So I guess what I'm suggesting is that if you find yourself in a rut -- or run into writer's block -- then perhaps you should look at your daily timetable and make the needed adjustments to write.

Until the next time....
Posted by Michael Embry at 2:12 PM No comments:

This past weekend I attended the 50th reunion of the 1966 graduating class of Taylor County High School in Campbellsville, Ky. 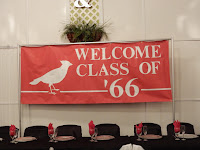 And what a gala event it was for the 50 or so classmates who chose to be part of the celebration to renew friendships, talk about the good old days (at least from our perspective) and to be part of a special event that only comes along once in a lifetime.

Fifty years. I know it's a cliche but my how time flies!

I was surprised to learn that I had inadvertently planted the seed for the reunion. Last January I contacted classmate Velma Prince to see if there were any plans for the 50th. I wanted to know because I didn't want to make vacation plans and not be able to attend.

Velma made several inquiries to some of our classmates. Then she reached Betty Fawcett Norris, who got the ball rolling in March. Betty put together a planning committee and provided the essential leadership to make it all happen.

And what a reunion it was. 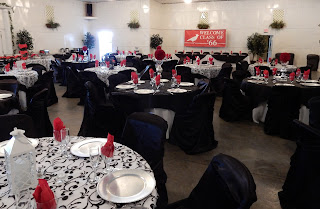 Even though I was on the planning committee, I was simply overwhelmed when I entered the All Occasions building and saw everything Betty and Velma had envisioned -- they wanted it to be "classy" -- for this special reunion. The table settings, flower arrangements, lighting, food, door prizes, silent auction, videos, and live music, everything was first class. Yes ladies, it was a classy affair!

But more than anything it was great seeing former classmates, some for the first time in half a century. There were about 125 in the graduating class. Sadly, 25 had passed away including two (Marshall Jones and Alton Phillips) in the Vietnam War. There were a few who couldn't be there because of illnesses and injuries. And there were about 50 who decided not to participate for various and sundry reasons. They missed a grand evening. 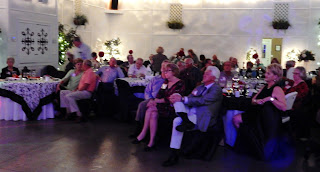 For the fabulous 50 who did take part, many with their spouses and significant others, it was an evening to remember (I've been told that 50 percent participation is great). There was a touching video dedicated to those who had passed away, bringing tears to many in attendance. Another video was devoted to Jones and Phillips, including clips from their time in Vietnam. It was followed by a recognition of classmates who served in the armed forces, several of whom were in Vietnam a year after graduating from high school.


And there was a video -- "Remembering Days Gone By" -- that reflected on those years with newspaper clips, photographs, and music from that era. And watching from the tables were people, mostly retired now, who became lawyers, firemen, teachers, artists, farmers, travel agents, business leaders, career military, social workers, and other endeavors after leaving high school.

The evening closed with toasts and farewells, given by Patricia Thompson Gray and Craig Cox, remembering the past, thankful for the present and looking ahead to the future.

For the record, I didn't graduate from Taylor County High School. I moved to Louisville in the summer of '65, and graduated from Eastern High School (from which I have many dear and lifelong friends). But those years at Taylor County (beginning in eighth grade) were a formative time for me and I've treasured them. Whenever there were reunions, I've always been invited and that increases my gratitude to these wonderful people who helped shape and make me (much for the better than for the worse). 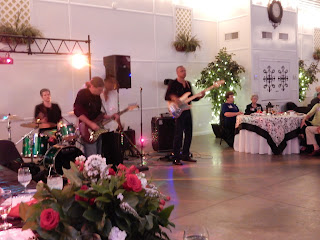 Someone I got to meet for the first time was Joe Niknejadi, who drove in with his wife, Vickie, and son, Jeff,  from St. Louis. Joe only attended Taylor County his senior year (he moved to Campbellsville about the time I left) but it had such a lasting impression on his life that he wanted to be there as well. James Daugherty, a retired fireman, and his wife, Juanita, made the longest trip, all the way from Florida.


I didn't recognize everyone, and I'm sure most of my classmates didn't recognize me. But once I started talking to them, the lines in their faces began to disappear, their hair returned to normal color and length (I don't recall any bald-headed guys in high school), and I could see the youthfulness in their eyes, the familiar facial expressions, and unique voice inflections from our encounters in the classrooms so many years ago. I'd like to think that we've all improved with age. 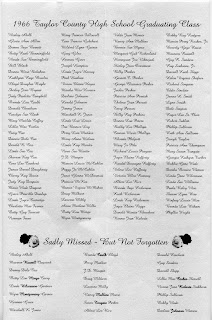 Let me close by saying that if you have a chance to attend a 50th class reunion, do it. You won't regret it -- it only comes around once in a lifetime.

I've had some false starts and a few stops since I began working on the sequel to "Old Ways and New Days," earlier this year, but sometimes life simply gets in the way. I suppose I'm making excuses -- and don't we all when things aren't going along smoothly?

And whoever said that writing was easy? OK, I'm sure there are a handful of writers out there who find it easy, or at least they make it appear that way. I found some of my previous novels easier to write, but again, I didn't seem to have the distractions that I've had the past few months.

Several personal issues came up, the biggest one involving the failing health of my father. I found it difficult to stay focused on my writing. In the past, and I've written about this, working on a novel has been somewhat of an escape for me. I could get lost in the world of words for a few hours. But when a loved one is involved, I'm not looking for an escape.

My Dad, GT Dale Embry, passed away last month, at the age of 89. He lived a full life, seldom complaining about things. He liked a sausage biscuit from McDonald's in the mornings, those sugar-filled circus peanuts and orange slice candies to snack on, and mini-pecan pie from Wal-Mart for dessert. He watched "Comment on Kentucky" and "The McLaughlin Report" on television. He enjoyed talking with me about the newspaper business. He was a fundamentalist Christian. He was a devoted Republican. But he was also very tolerant and accepting of others because he liked people, regardless of race, color, creed or whatever. And they liked him.

And Dad loved his dog, Brownie, his faithful companion the past four years as he suffered through failing eyesight and hearing loss.

Dad's last couple of weeks were painful after fracturing his hip in a fall -- and it was difficult as well as for me, my siblings and caregivers who tended to his needs -- but when he passed on the morning of Aug. 9 in a Louisville hospital, it was peaceful. He was no longer in pain.

My father was my biggest supporter. Whenever one of my novels or nonfiction sports books was published. he'd be the first to purchase several copies and give them to friends, co-workers (he worked until he was 83), and relatives as gifts. Whenever we talked, he always asked me how my writing was coming along. He cared. He was proud that I was a writer.

Now that he is gone, only to live in the memories of those who really knew him, I can return to my writing with renewed energy and fervor. And I'll keep in mind that he would like that my writing was coming along -- again.

Until the next time....
Posted by Michael Embry at 4:54 PM No comments: