Writing a Novel: One Day at a Time

I plan to do a lot of writing in November. Every day. Lots of words. And at the end of the month I plan to have the beginning, or first draft, of another novel.
At least I hope so.

I'm participating for the first time in National Novel Writing Month, or commonly referred to as NaNoWriMo. I've signed up on the website and I'm practically chomping at the bit to get started. All I have to do is produce a minimum of 50,000 words.

NaNoWriMo is promoted as "thirty days and nights of literary abandon" -- simply a way to let the creative juices flow for an entire month. Thousands of writers from around the world take part in the exercise, from school children to old folks.

While I have a lot on my plate in November, I think it's important to set aside time for writing. I do write every day, but it's not always creative writing.

On my previous five novels, I wrote daily on each one until I completed the first draft. Then I went back and did numerous rewrites to make them suitable for publication.

If you've never taken part in NaNoWriMo, I encourage you to take part, even as a personal challenge to yourself to see if you can do it. You can join virtual groups that offer encouragement and there are apps to help you keep your word count.

Don't be intimidated by the thought of writing each day for a month.  As a marathoner takes one step at a time, you simply need to approach it one day at a time. And we know that time flies, especially when you're having fun, so the 30 days will be over before you know it.

Good luck and I hope to see you at the finish line!

Until the next time…
Posted by Michael Embry at 8:46 AM 5 comments: 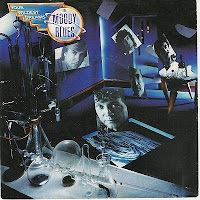 The Moody Blues reflected on lost love in "Your Wildest Dreams."

Lead singer/guitarist Justin Hayward penned the song, which reached No. 9 on the Billboard charts in 1986.

The narrator recalls youthful times, possibly a first or teenage love, and how circumstances in life pulled them in different directions. And he reminisces:

We learn that the singer is gravitates to music and away from the person he cares about, a decision in which he expresses some regret because they had something special between them:

Do you ever wonder if those you cared about in your past still think about you?

The music video was named Video of the Year by Billboard magazine. The legendary Moodies recorded a sequel to the song two years later, "I Know You're Out There Somewhere," also written by Hayward.

Email ThisBlogThis!Share to TwitterShare to FacebookShare to Pinterest
Labels: I KNow You're Out There Somewhere, Justin Hayward, The Moody Blues, Your Wildest Dreams

A Place of Remembrance

While on vacation this past week, I made a stop at the Flight 93 Memorial, near Stoystown, in rural southern Pennsylvania.

For those who don't remember that fateful flight on Sept. 11, 2001, the forty courageous people prevented al-Qaeda terrorists from crashing a United Airlines jet into the nation's capitol.

The memorial is a work in progress but already reaches into the hearts and souls of those who stop and pay their respects. It is quiet and solemn, a place for contemplation and reflection about that infamous day in American history.

Along the walkway to the Wall of Names are benches to view the field where the jet fell from the sky. There are places where visitors have left small flags, trinkets, coins and other small items to show their gratitude.

The Wall of Names includes the names of the flight crew and passengers. And from that point is a gate that leads to the final resting place for these courageous victims that only family members can visit.

As part of the ongoing work, more than 13,000 trees are being planted on 40 groves to honor the fallen heroes. A visitor and learning center is part of the second phase that is expected to be completed in two years. The final phase will include a Tower of Voices with 40 wind chimes.

Until the next time…
Posted by Michael Embry at 8:31 PM 2 comments:

Self-publishing puts an author in the driver's seat. But that doesn't mean he/she is carrying the whole load.

Sure, the writer produces the words that make the book, but you have to consider some other parts such as who turns the manuscript into a book? Who delivers it to stores and/or websites? And who provides royalty payments?

While those folks are often unseen and unheard, they work behind the scenes to keep the proverbial ball rolling for the author.

As those who follow my blog already know, I self-published for the first time when "Laments" was released in August. I hired an editor, cover design, and formatter to get the manuscript in shape and ready for the market.  I probably could have done those things myself, and many authors do, but I wanted input from others, much like I get through a traditional publisher.

I've done some marketing and promotion for the book -- much like I've done for previous books -- but I still rely on companies such as CreateSpace, Smashwords, Amazon, and Barnes & Noble to serve it up to the public and provide me with royalties through their accounting departments.

I hope you can see, that while I've self-published, it's taken the assistance and support of others to make it all happen.

Until the next time…
Posted by Michael Embry at 8:04 PM 3 comments: 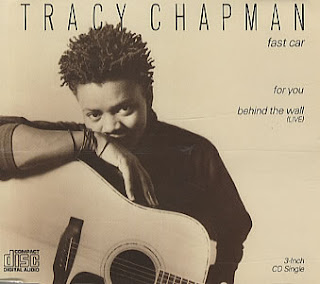 Singer-songwriter and social activist Tracy Chapman sang about the seemingly endless cycle of poverty as it relates to a young woman in "Fast Car."

The song reached No. 6 on the Billboard Hot 100 chart in 1988. A year  later she received a Grammy Award for Best Female Pop Vocal Performance.

The song begins with the woman wanting to flee her sad surroundings and start a new life with her lover:

We learn that the girl's mother left the family because of her alcoholic father but that she decided to drop out of school and take care of him. She expresses hopes and dreams of finding a new life:

But that doesn't happen as she finds work at a grocery store, he doesn't have a job, and they end up living in a shelter. And then we discover that she's back in the situation her mother experienced with her dad:

And in the end she says:

The song is so powerful because Chapman focused on one person and the struggles she faced to escape poverty. And true to reality, it is extremely difficult to break that cycle.

Chapman followed "Fast Car" with other noteworthy songs such as "Talkin 'bout a Revolution," "Baby Can I Hold You," and "Give Me One Reason."

A Colorful Time of the Year

This is a colorful time of the year – fall, football, fairs and festivals.
According to Book TV, there are eight major book fairs being held across the United States in October and November. It’s a time when readers get to meet some of their favorite authors. It’s also an opportunity for authors to connect with readers on a personal level.

Where I live in Frankfort, Ky., we’re preparing for the 31st annual Kentucky Book Fair, which will be held Nov. 9-10 at the Frankfort Convention Center.  And now for the disclaimer: I serve as the marketing chair on the executive board, and in that capacity, try to spread the word about this wonderful event.

I personally believe authors and writers should participate in events such as book fairs -- national, regional, statewide, or local. Anything to promote reading and writing is a win-win situation for writers, readers, and communities. And I must add that we have authors who go to bat for the KBF.

Over the next few weeks leading up to the fair, KBF board members and volunteers will be sending out news releases, making TV and radio appearances, working on the catalog, and  doing other things (be sure to “like” us on Facebook) to publicize the event. This year we plan to have author interviews posted on YouTube as well so stayed tuned for that.

Nearly 200 authors will participate in this year’s fair, signing books, giving readings, and talking to readers. Proceeds from the fair are used to provide grants to public schools and libraries, and literacy programs across the state.

Until the next time…
Posted by Michael Embry at 8:00 PM 3 comments:


In memory of R.B. Greaves, who recently passed away from cancer, this post features his biggest hit, "Take A Letter, Maria." It reached No. 2 on the Billboard charts in 1969. 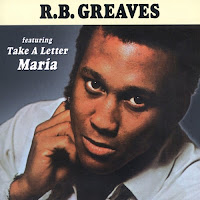 Greaves penned the song about a man sending a letter to his unfaithful wife after he walks in on her "in the arms of another man."

The narrator, after packing his bags and leaving the house, dictates a letter to his secretary, which is repeated in the song's chorus:

In the second verse, the man admits that he may have played a part in the matter:

I think the song takes a cute twist at the end when he turns his attention to Maria:


"I never really noticed how sweet you are to me
It just so happens I'm free tonight
Would you like to have dinner with me?"

I believe the horns in the song give the song a Latin flavor. It was recorded at the famed Muscle Shoals Sound Studio in Alabama.

If you read the obituary, you'll find that Greaves was a nephew to the late, great singer Sam Cooke, one of my all-time favorite artists.

There’s nothing quite like having car problems. I’ve had my fill the past couple of weeks. That’s one reason I haven’t been posting anything.
It all started when I was driving to  work and my car

made a rattling noise under the hood and abruptly stopped. I had it towed to a service center and the mechanics found a broken surpentine belt. I thought -- and they thought -- it would be a simple repair. Not my luck. The oil-sending unit was destroyed and other internal mechanisms (hey, folks, I’m not a mechanic!) were messed up. And after keeping it for three days, they couldn’t get it started.

So I had the car towed to a dealership, hoping they would have the diagnostic equipment to find the problem. They did various and sundry things, but were unable to get it started. They may have been able to, however, if  I was willing to spend more than the car was worth. I don’t think so!

Around that time, I had a doctor’s appointment. I took my wife’s car. While leaving the parking lot after a procedure, I bumped into another car. It didn’t cause much damage to the other vehicle, but my wife’s car had to go to the body shop.
While waiting on the final verdict on my car, I decided to get a rental. I kept it for about eight days. After returning the car, I was told I owed $25 to repair a crack in the windshield. Huh?!? I didn’t notice a crack when on the initial inspection so there wasn’t much I could do.
Of course, I’ll never use -- or recommend -- that rental service in Frankfort again so they’ll be losing out more than the money they got from me. Hey folks, my advice is to really go over your rental car because you never know how nitpicky they’ll be. I should have known better.
I’ve bought another car and my wife’s vehicle should be back on the road soon. So I’m back on the road again. Be on the lookout -- and wish me luck!
Until the next time…
Posted by Michael Embry at 8:33 PM 2 comments: