Writing From The Past -- On Second Thought

After writing my last post about revisiting the past through photographs, friends, and travel, I was lying in bed and thinking about some incidents in my life (probably the best time for those things to happen before drifting off to sleep) and it occurred to me that one of the best ways is to look within oneself.

While those other suggestions from Ray Bradbury are wonderful prompts for virtual time travel, layers of memories that we can unfold through thought may be the most meaningful.

For me, thinking about certain things almost brings back to life what I felt, smelled, heard, and saw on specific occasions. And the more thought I put into it, the more it unfolds in my psyche.

I suppose this could almost be a self-analysis. It can be painful, joyful or simply a 3D snapshot to observe something from the distance of time.

It’s important to write down your thoughts before they slip out of sight and out of mind. I would guess that most of us probably tend to procrastinate (and that includes yours truly), believing we can remember to do it later, but only to discover that we forgot to record what we wanted to recall from our past. I have the additional handicap of senior moments.

Don’t feel you have to write the entire episode. Jot down the highlights and review them to keep them somewhat fresh in your mind.

Until the next time…

Writing From The Past

I just finished reading Ray Bradbury's "Zen in the Art of Writing: Releasing the Creative Genius Within You," a collection of insightful essays that will surely inspire most writers to, well, write.

One of the lessons I relearned -- no apology because I'm always learning or relearning things -- is to tap into your past  to energize (or re-energize) oneself for story ideas.

For me,  looking at old photographs back to the days of my childhood is something I enjoy. Those images bring back a flood of memories from times with my parents, siblings, relatives, friends, special events, and everyday occasions.

Another way is to visit friends  from your distant past and start reminiscing about those times that have slowly begun fade. No doubt they'll say things that will rekindle your memory.

They key, of course, is to write those things down before they begin to fade away into the deep, dark recesses of the brain.

Writers of fiction such as such as Mark Twain, John Grisham, Charles Dickens, Ernest Hemingway and Bradbury (among countless authors) reached into their past to craft their wonderful stories. I did the same when I wrote my young-adult novel, "Shooting Star."

It's also a valuable resource for creative nonfiction writers. One of my author friends, Georgia Green Stamper, brought back vivid memories in her "Butter in the Morning," a collection of remembrances that I'm sure her family will treasure for many years to come. It brought back some memories for me as well.

Story Songs: It's All in the Game 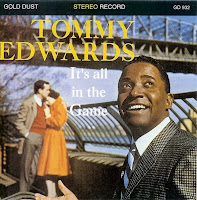 The song has an interesting history. The music was composed by Charles Dawes, in 1911 as "Melody in A Major." He later became vice president under Calvin Coolidge. The lyrics were by Carl Sigman, penned 40 years later.

It's a simple love song about a couple falling in love, then having a minor spate, and making up. As the lyrics say, it's part of the game of courtship that I'm sure most of us have played at least once if not several times.

And in the second verse:

Then comes the kisses and flowers as the couple gets back together:

Edwards first recorded the song in 1951, and it reached No. 18 on the pop charts. Seven years later, with more of a rock 'n' roll tempo, it topped the chart.

Edwards had several minor hits after "It's All in the Game." Sadly, he passed away in 1969 at the age of 47 from a  brain aneurysm.

The classic song has been covered by numerous artists, such as Cass Elliott, Merle Haggard, Barry Manilow,  Bobby Bare, and George Benson and Neil Sedaka. It ranks No. 18 on Billboard's All-Time Top 100.

"It's All in the Game" lyrics

Email ThisBlogThis!Share to TwitterShare to FacebookShare to Pinterest
Labels: Carl Sigman, Charles Dawes, It's All in the Game, Tommy Edwards


I don't believe I could stand another day watching the NCAA men's and women's basketball tournaments.

The games, for the most part, were filled with great storylines along with nail-biting outcomes and a few surprises as well as a few clunkers thrown in for good measure during the three-week run.

So what's my beef? The commercials. If I saw one, I must have watched it 25 times during the course of the tournaments.

Some were  clever and cute, such as the Capitol One spots featuring Charles Barkley, Greg Anthony and Alec Baldwin, and the AT&T ads, with the children and later featuring NBA Hall of Famers Magic Johnson, Kareem Abdul-Jabbar, Larry Bird and Bill Russell (especially the slow break).

And then there were the All-State spots with "March Mayhem;" the guys in Lowe's building a deck; Applebee's with Bob Knight and Digger Phelps; AXE with the clip from the Valparaiso-Ole Miss game from years ago; the Liberty Mutual Insurance ones playing the Human League's song "I'm Only Human;" and Florida coach Billy Donovan and staff talking logistics the UPS way.

A friend mentioned to me that it takes a commercial about five showings to register with a viewer. I think I got overload.

This past week I finally put together a trailer for "Laments,"  my short-story collection. It was way past due since the book was published last August.

I generally put together a trailer and release it about the time the book is published, or at least a few weeks later.

As I mentioned, I do the trailer. It takes some preparation but not a lot. And if you have everything in place, it shouldn't take more than an hour or so to complete it.

One thing I've learned -- at least from my viewpoint -- is to make the trailer as short as possible. My first trailer, for "Foolish Is The Heart," ran more than two minutes. I've questioned whether people really want to watch a trailer for that long.

My last trailer, for "Laments," ran 70 seconds. It's really a minimalist-size trailer since I don't have many images. Why? I suppose because the trailer is so overdue. I can always go back and add images -- if I find the time.

I would guess that any computer with Windows will have software to compose a video. It's not that difficult. And I can do it, well, I'm sure you can do it as well.  I'm sure you can find a service on the Web that can produce one as well.

As mentioned, it's nice to have images. I also include music, which is easy to find. Just make sure you have permission to use it. I also give credit for the composition at the end of my videos.

I've included book trailers for my books as well as one I did for Steve Flairty so you'll have see how I've approached each book.

Good luck with yours!

Another tune that's part of the soundtrack of my life is "Baby The Rain Must Fall," the title song of the 1965 movie that starred Steve McQueen and Lee Remick. 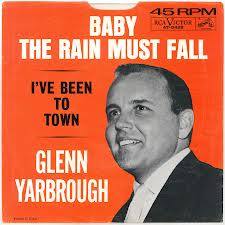 The song, with music by the award-winning Elmer Bernstein and lyrics by Ernie Sheldon, was a big hit for legendary folksinger Glenn Yarbrough, reaching  No. 12 on Billboard's Hot 100 and No. 2 on the Easy Listening charts.

To me, the song is about being true to oneself. The movie is about a man trying to turn his life around after serving time in prison.

The song opens with words about a person's calling:

"Some men climb a mountain,
Some men swim the sea,
Some men fly about the sky
They are what they must be"


And then the narrator sings:

"But baby the rain must fall,
Baby, the the wind must blow
Wherever my heart leads me
Baby, I must go"

Then lyrics about not selling your soul:

And then the refrain:

And the final verse about the uncertainty of life:

"I am not rich or famous
But who can ever tell?
I don't know what waits for me
Maybe heaven, maybe hell"

And the refrain that closes with the lines:

Yarbrough, a tenor and guitarist, was a founding member of the The Limeliters in 1959, then went on to a solo career in 1963. He's 83 now and still records and performs.

Sheldon was also an early member of The Limeliters, joining the group after Yarbrough departed. The group disbanded in 1965 but reunited in the '70s, and has been around in various lineups since then.

"Baby The Rain Must Fall" lyrics